Okay, it’s been a while since made a posting to iTeacher.  A long while.  I’ve spent the last year going through some major transitions.  I moved from Australia to the United States.  I also accepted a new job teaching instructional technology to 7th graders at Jackson Memorial Middle School in Massillon, Ohio.  I also enrolled in the School of Library and Information Science at Kent State University where I am studying to become a K-12 media specialist.  I hope to revitalize my blog again and re-join the conversation on e-learning and technology integration in schools.

I just read an article Technology: The Wrong Questions and the Right Answers by Ira David Socol.  I wanted to pass it onto you because it raised some excellent points about how we approach technology integration.  The article offers a historical perspective on the controversy of new technologies as they threaten the status quo in schools.  For example, the introduction of the student slates in classrooms in the 1840s was hugely controversial.  Imagine that!

Says Socol: “Yes, we still have stone carvers. Yes, we still have calligraphers. But we no longer teach students to chase the duck, pluck the feather, and cut the quill.  We no longer teach Morse code … Now we must give up teaching that ink-on-paper is the primary information source. It is not. We must give up insisting that students learn ‘cursive’ writing. Instead, they must learn to text on a Blackberry and dictate intelligibly to their computer.”

The article ends with a bang.  Follow its link in this posting to read the entire article.

I want to be careful not to turn this forum into a political debate.  However, I do like some of Barack Obama’s comments about moving America’s education system into the 21st century.  He recognizes that America’s future economic strengths lie in science and innovation.  It sounds like Obama wants to invest in science and technology, as well as a more comprehensive assessment framework that involves critical thinking and problem solving skills.  I place the video here simply as an information resource, but feel free to comment if you support or oppose his viewpoints. 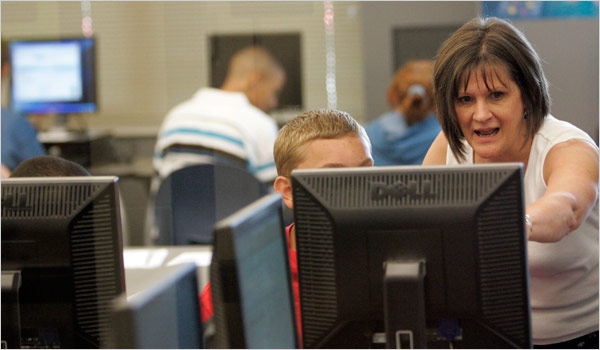 The New Technology method transforms classrooms from lecture-and-textbook models into active, inquiry-based learning centers.  Students conduct research to tackle real issues and answer complicated questions.  They meet state standards and benchmarks by getting out of their seats and completing practical tasks.  According to the article, students in active, project-based classrooms perform better in class and on standardized tests.  They own the information because they had to discover it themselves through guided activities.

An excellent video from the New Technology Foundation website documents a math teacher at New Technology High School in Napa, California who starts her teaching units by looking at the state standards and then brainstorming how she can create real-world, hands-on applications for her students.  It would be a seriously fun math class where students get out of their seats, conduct experiements and work collaboratively.  Quite different from the textbook-and-lecture math classes I received in high school, from which most of the information sits in a dusty region of my brain known as the medulla iforgotta. 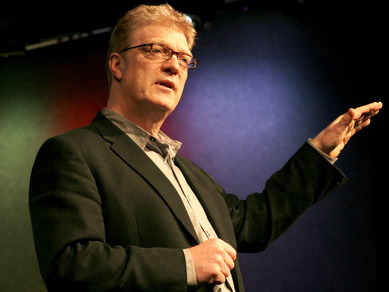 As you may have figured out, I am a huge fan of author and lecturer Sir Ken Robinson, who speaks about education transformation through creative engagement and an awakening of the arts. I recently discovered another inspiring lecture, called Changing Paradigms, which Sir Ken gave in June at the Royal Society for the encouragement of Arts, Manufactures and Commerce. The lecture lasts 55 minutes, but it is an hour well spent. Robinson is inspiring, humorous and very informative. He hits the nail right on the head if you ask me. Here’s the link to the video:

This week the International Society for Technology in Education released a promising update to its National Educational Technology Standards for Teachers (NETS-T) framework.  The new standards reflect a new way of thinking about technology’s role in 21st century education.

The previous NETS-T standards maintained a focus on teacher-driven textual knowledge.  I am delighted to see that the updated NETS-T standards reflect a strong emphasis on the teacher as a co-learner and a knowledge facilitator.  Rather than merely delivering content knowledge to students, teachers are now expected to guide their students through a creative learning process that involves collaboration, innovation, problem solving and authentic learning experiences.  This is a significant step forward in re-defining the role of the teacher in 21st century society.  NETS-T 2008 is now on the right track.

For more information on NETS-T 2008, I invite you to read Dave Nagel’s article The Future of Instruction: Teacher as ‘Co-Learner’ in The Journal.

Schools are beginning to utilize an excellent teaching resource when designing their technology professional development program … their students! And why not? Students are generally tech savvy and often know more about information and communication technology than their teachers. Most students I know would jump at the opportunity to turn the tables and share their expertise with their students.

In an Edutopia article called Turning the Tables: Students Teach Teachers by Sara Armstrong, students in Olympia, Washington provide structured technology professional development workshops for their teachers. The program is a huge success. The teachers learn some excellent software skills, while the students feel empowered and appreciated for their knowledge. I can’t imagine such a professional development program would cost anything to the school district. It’s a win/win situation. I would love to see more school districts tapping into this excellent resource. Please share some success stories here if you have worked in a school district with a similar program.

I just read an article in Education Week that is sure to stir up controversy amongst educators. The article, entitled Proposal Would Replace Classroom Textbooks with Computers, discusses a bill in the Arizona legislature that would allow school districts to seek issue bonds from their community to purchase computers rather than textbooks.

Are the days of the textbook numbered? Digital and online educational resources surely have a lot of advantages over traditional textbooks. They are limitless in number. They can be instantly updated. They can allow for interactivity and collaboration. They don’t deteriorate or get lost. They provide numerous viewpoints on topics. Textbooks seem pretty archaic when compared to digital resources.

The only real problem I see in eliminating textbooks is that of equity. When course material is provided digitally, all students require a computer and internet access. Arizona is making efforts to overcome this financial burden. I wonder if more states are doing so.

Assuming we can provide access for our students (no small feat, I know), are there any other significant arguments against the proposal of migrating from printed course materials to online resources?

This month’s Education Week has published an interesting article entitled ‘Soft Skills’ in Big Demand by Catherine Gewertz, which discusses a new approach to learning being adopted by many schools to help incorporate the ‘soft’ or ‘applied’ skills now in demand in the 21st century work force.  According to the article:

“In an increasingly global, technological economy, they [policy and business leaders] say, it isn’t enough to be academically strong. Young people must also be able to work comfortably with people from other cultures, solve problems creatively, write and speak well, think in a multidisciplinary way, and evaluate information critically.”

Schools are adopting applied learning outcomes, such as interpersonal skills and oral communication , to which students are assessed in all curricular areas, including mathematics and science.  The article discusses an algebra class at Sacramento New Technology High School, where instead of solving problems out of textbooks, students study and solve problems of real-world issues.  Students in this project-based class are evaluated on citizenship and ethics as well as their math skills.  Combining subjects, such as geography and English, have allowed students at this school to study multidisciplinary topics in greater depth.

It is refreshing to see pioneer schools taking a proactive role in preparing their students for life in the 21st century.  I believe ‘soft skills’ are even more important than academic skills because they are the skills of life, and they are the skills we must use everyday.

Already a fan of Sir Ken Robinson‘s work, I came across an inspiring video on Edutopia‘s website. Entitled Creatively Speaking, this lecture was recorded at the Apple Education Leadership Summit in April, 2008. In this lecture, Mr. Robinson discusses the need for curriculum reform that recognizes the changing dynamics of our global economy. He argues that our current education model is based on an industrial-age economy. In the Information Age, we need to tap into children’s creative and problem-solving qualities in order to prepare a generation of students who can think on their feet and adapt to an ever-changing work force. The video and an accompanying article can be found on this Edutopia link. (I couldn’t get the video to embed here.)

Welcome to your brand new blog!

This is a sidebar and can be changed in Widgets in your dashboard.

You can also modify number of sidebars in theme options!